Teampull Chaluim Chille is an ancient church dedicated to St. Columba and located in Balivanich on the Isle of Benbecula. In 1997, as the remains of the church were deemed to be of national importance, the site became a Scheduled Monument. Its Canmore ID on the RCAHMS database is 9970. 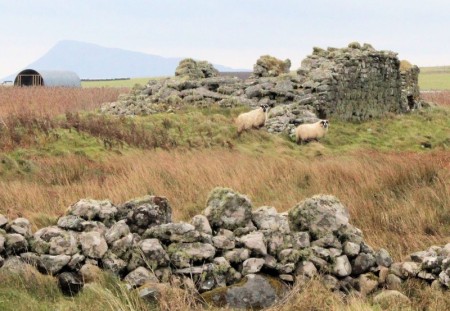 Sitting on a natural hillock, the church grounds used to be within Loch na Cille, but the loch was drained in the 19th century. As a result, the remains of the building and some ancillary structures (whose purpose can only be speculated about at this time) are now surrounded by reedbeds and marshy ground.

While the church is in ruins, much of the original structure remains, along with the foundations of other constructs which have not yet been investigated. To date, information about its origins comes from oral traditions, so there is no complete certainty about its original construction date. Teampull Chaluim Chille might date back as early as the 8th century, but only a full archaeological survey would ensure that the origins of the building could be dated with a degree of accuracy.